Abstract: In recent years mule (Odocoileus hemionus) and black-tailed (0. h. columbianus) deer appear to have declined in many areas of the western United States and Canada, causing concern for population welfare and continued uses of the deer resource. Causes of the decline have not been identified, but predation by coyotes (Canis latrans), mountain lions (Puma concolor), and wolves (Canis lupus) has been proposed as one of many factors. We reviewed results of published studies conducted since the mid-1970s concerning predator-deer relationships to determine whether predation could be a factor in the apparent deer population declines and whether there was evidence that predator control could be a viable management tool to restore deer populations. We reviewed 17 published studies concerning mule deer. We found only 4 pub-lished studies of the effects of predation on black-tailed deer. A larger database exist-ed for white-tailed deer (0. virginianus), with 19 studies examining effects of preda-tion on white-tailed deer. Study results were confounded by numerous factors. A deer population's relation-ship to habitat carrying capacity was crucial to the impacts of predation. Deer popu-lations at or near carrying capacity did not respond to predator removal experiments. When deer populations appeared limited by predation and such populations were well below forage carrying capacity, deer mortality was reduced significantly when predator populations were reduced. Only one study, however, demonstrated that deer population increases resulted in greater harvests, although considerable data indicat-ed that wolf control resulted in greater harvests of moose (Alces alces) and caribou (Rangifer tarandus). The most convincing evidence for deer population increases occurred when small enclosures (2-39 km2) were used. Our review suggests that predation by coyotes, mountain lions, or wolves may be a significant mortality factor in some areas under certain conditions. Relation to habi-tat carrying capacity, weather, human use patterns, number and type of predator species, and habitat alterations all affect predator-prey relationships. Only through intensive radiotelemetry and manipulative studies can predation be identified as a major limiting factor. When it is identified, deer managers face crucial decisions. 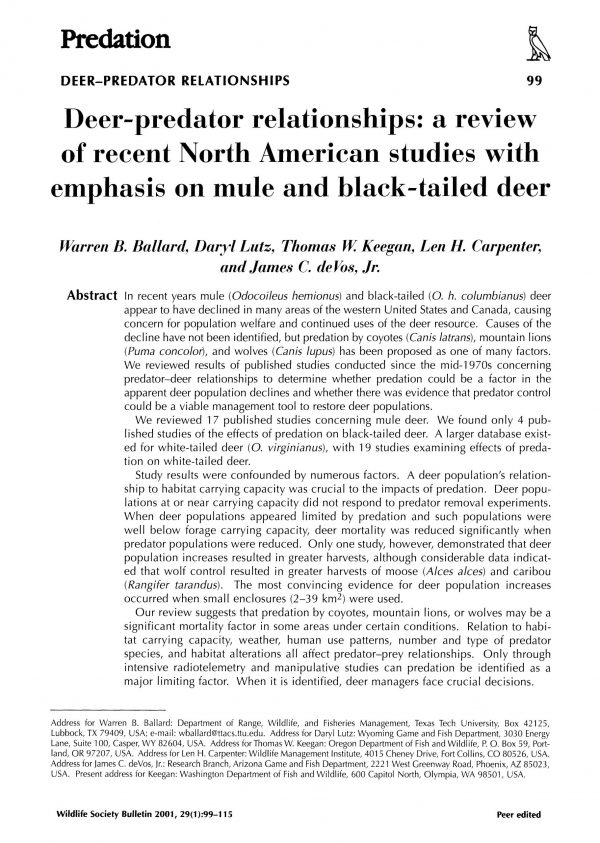