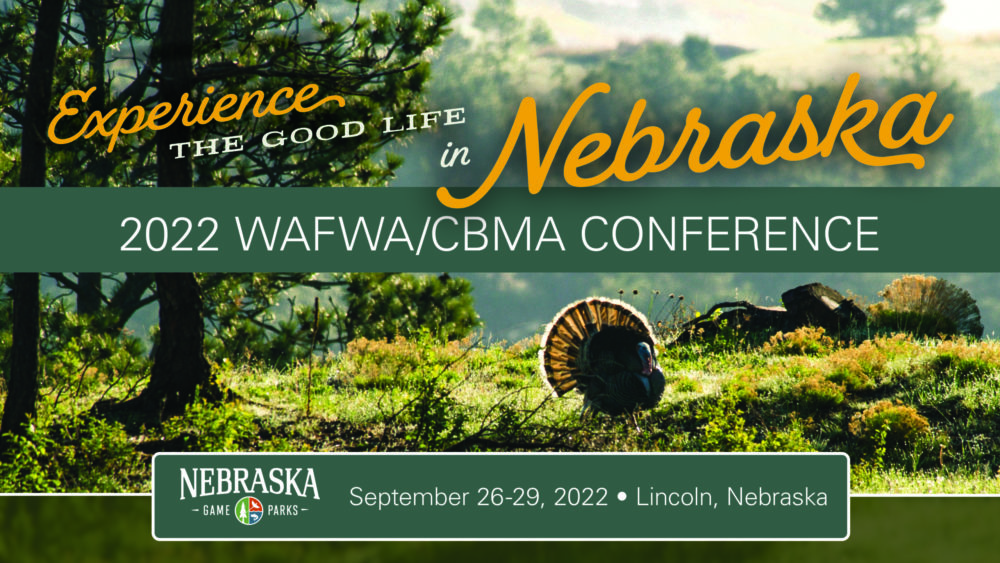 The Fish and Wildlife Administrative Officers from the Western Association of Fish & Wildlife Agencies (WAFWA) and the Conservation Business Managers Association (CBMA) throughout the United States and Canada are dedicated to raising the standards and establishing best practices in support of promoting a broader understanding and acceptance of the value of business management as a tool of natural resource management.

This annual conference is an opportunity for State Fish and Wildlife Agency Administrative Staff to interact with their peers from other agencies throughout the United States and Canada. Administrative staff represent the heads of Procurement, Licensing, Information Technology, Human Resources, Finance and Budget. The first workshop was hosted by WAFWA in 1961!

Join us for the 2022 WAFWA Administrative Officers Workshop (AOW) and CBMA Joint Conference in Lincoln, Nebraska.

Join us as a Sponsor!

Gain exposure to fish & wildlife professionals, networking opportunities, exchange ideas, and learn about the challenges your customer agencies are facing.

Joel Sartore is an award-winning photographer, speaker, author, conservationist, and the 2018 National Geographic Explorer of the Year. He is a regular contributor to National Geographic Magazine, and an Eagle Scout. His hallmarks are a sense of humor and a Midwestern work ethic. Joel specializes in documenting endangered species and landscapes around the world. He is the founder of the Photo Ark, a 25-year documentary project to save species and habitat.

“It is folly to think that we can destroy one species and ecosystem after another and not affect humanity,” he says. “When we save species, we’re actually saving ourselves.”

Joel and the Photo Ark are the subjects of the television series RARE, in which he documents some of the most endangered creatures left on Earth. In addition to National Geographic, Joel contributes to Audubon, Geo, the New York Times, and Smithsonian. He has several books, including Photo Ark: A World Worth Saving, The Photo Ark Vanishing: The World’s Most Vulnerable Animals, Birds of the Photo Ark, and RARE: Portraits of America’s Endangered Species.

He and his work have been the subject of many national broadcasts, including National Geographic’s Explorer, NBC Nightly News, the CBS Sunday Morning Show, ABC’s Nightline, NPR’s Weekend Edition, PBS Newshour, Fresh Air with Terry Gross, 60 Minutes, and the Today Show. Joel is always happy to return from his travels around the world to his home in Lincoln, Nebraska.

About the Photo Ark

The interaction between animals and their environments is the engine that keeps the planet healthy for all of us. But for many species, time is running out. When you remove one, it affects us all.

Joel Sartore started the Photo Ark in his hometown of Lincoln, Nebraska, over a decade ago. Since then, Sartore, a world-renowned photographer, has visited more than 50 countries in his quest to create a photo archive of global biodiversity, which will feature portraits of an estimated 15,000 species of birds, fish, mammals, reptiles, amphibians, and invertebrates. Once completed, the Photo Ark will serve as an important record of each animal’s existence and a powerful testament to the importance of saving them.

To date, Joel has completed portraits of more than 11,000 species. No matter its size, each animal is treated with the same amount of affection and respect. The results are portraits that are not just stunningly beautiful, but intimate and moving. “It’s the eye contact that moves people,” Sartore explains. “It engages their feelings of compassion and a desire to help.”

Led by National Geographic photographer Joel Sartore, the National Geographic Photo Ark aims to document every species living in the world’s zoos and wildlife sanctuaries, inspire action through education, and help save wildlife by supporting on-the-ground conservation efforts. Learn more and donate to help save species at risk at NatGeoPhotoArk.org.

Joel Sartore has added more than 11,000 species into the National Geographic Photo Ark. He has roughly 4,000 to reach his goal! See what we can #SaveTogether before it’s too late at NatGeoPhotoArk.org.

Thank you to our
Meeting Sponsors!

Sponsored By:
(Click the logo to visit their page)

Candi Jones is a Certified Professional Corporate Coach, Specialist in Organizational Development, Human Resource Consultant in Diversity and Inclusion, Implicit Bias, Entrepreneur, and Inspirational speaker. Her powerful intuition and ability to meet people where they are, has served her well in her profession and she created and implemented a Career Coaching Program for a Fortune 500 company that is changing the way corporations view talent development, specific to retaining and developing diverse talent as well as how organizations retain and engage internal talent and as well as increase community connections.

Candi is extremely active in her community, recently earning the award of 2020 Greater Omaha Chamber Changemaker for her work in the community and activism. She also recently earned a 2021 Young, Black and Influential Award for her commitment to creating equitable systems and processes within non-profits and corporate spaces. She also supported and heavily advocated for LB1060 (the Crown Act) to ban natural hair discrimination in the workplace. She sits on several boards and chairs several committees, including Survivors Rising, Urban League of Nebraska, Women on a Mission and Methodist Hospital Foundation. Her passion to help people live authentic, purpose driven lives extends beyond corporate spaces and non-profits.

She owns a career/life coaching business (Coaching with Candi) further amplifying her work as a coach and speaker. Based on her own experiences, trauma and journey, she is dedicated to helping others feel empowered and accountable for gaining clarity in their lives.  The cornerstone of her work is how to turn challenges into lifechanging transformations, and she does that by intentionally connecting people through the power of communication, relatable story-telling and what she calls the heart(hard) work involved in using her experiences to elevate the voices of underrepresented populations and communities.

JOIN US AS A SPONSOR

Gain exposure to fish & wildlife professionals, networking opportunities, exchange information and ideas, and learn about the challenges your customer agencies are facing.

Your sponsorship of the WAFWA/CBMA Conference would assist us in hosting a world-class event and demonstrate your organization’s commitment to wildlife conservation. In exchange, your organization will have the valuable opportunity to make face-to-face CONNECTIONS with hundreds of fish and wildlife professionals; you’ll have ACCESS to people who need your products and services; and the EXPOSURE will reinforce your brand awareness and maximize visibility in the wildlife community.

As a sponsor or exhibitor promoting your services to Natural Resource Business Professionals, you will have the ability to showcase your business through an exhibit space, attend meals and social functions building relationships with our attendees, and attend a special Vendor cocktail party located within the vendor exhibit space which will provide an opportunity to discuss your products and services. Please check back soon for details on how to become a sponsor!

The Fish and Wildlife Administrative Officers from the Western Association of Fish & Wildlife Agencies (WAFWA) and the Conservation Business Managers Association (CBMA) throughout the United States and Canada are dedicated to raising the standards and establishing best practices in support of promoting a broader understanding and acceptance of the value of business management as a tool of natural resource management.

This annual conference is an opportunity for State Fish and Wildlife Agency Administrative Staff to interact with their peers from other agencies throughout the United States and Canada. Administrative staff represent the heads of Procurement, Licensing, Information Technology, Human Resources, Finance and Budget. The first workshop was hosted by WAFWA in 1961, view the WAFWA AOW objectives and membership (PDF, 99 KB). The first joint WAFWA AOW and CBMA conference was held in 2002. View the Host, Co-Host Responsiblities (PDF, 134 KB).

Rotation Schedule For Hosting the Conference

The WAFWA / CBMA Joint Workshop is a annual meeting held in odd numbered years sanctioned by WAFWA to accomplish this common goal by providing a forum for members to discuss current issues, exchange ideas and information through study, education, research and cooperative communication. 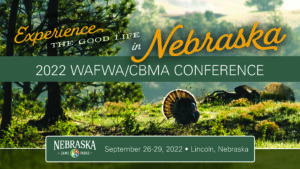