Held virtually on June 2, 2021. Hosted by the Western Association of Fish and Wildlife.

Bighorn sheep, an icon of the American West, battle to survive as contact with infectious diseases carried by domestic sheep threaten these wild herds. The respiratory pathogen mycoplasma ovipneumoniae (M.ovi), while benign in their domestic sheep hosts, can present deadly complications for bighorn sheep and often leads to widespread pneumonia outbreaks and significant die-offs. Domestic sheep grazing on public land was an integral part of settling the western United States. However, as conservation efforts ramp to rebound bighorn populations, the wool industry, scientific community, and wildlife advocates are at a crossroads. Wild & Wool had its public debut as a featured introductory film during the Wild Sheep Foundation’s Sheep Week virtual convention on January, 2021.

Support a healthy ecological balance on your public lands!
Explore the effects of America’s overpopulated wild horses and burros on wildlife, public lands, and ecosystems as you travel through Nevada with wildlife ecologist Charles Post.

Charles spends time in the field with wildlife biologists and researchers to examine meadows destroyed as a result of too many horses, and contrasts those with areas where a diversity of native plants and wildlife thrive. He also examines how overgrazing caused by excess horses impacts the sagebrush ecosystem and riparian areas, effecting the habitats of greater sage-grouse and Lahontan cutthroat trout. Post also visits a holding facility for horses gathered and removed from the range by the Bureau of Land Management and speaks with a former Chief of BLM’s Wild Horse and Burro program about the value of public lands, the challenges of wild horse and burro management, and the risks of continuing to let horse and burro populations grow.

Although the risk of disease transmission from domestic sheep or goats to wild sheep is widely recognized, a unified set of management recommendations for minimizing this risk has not been adopted by responsible agencies. These Western Association of Fish and Wildlife Agencies (WAFWA) recommendations were produced to help state, provincial, and territorial wild sheep managers, federal/crown land management agencies, private landowners and others take appropriate steps to eliminate range overlap, and thereby, reduce opportunities for transmission of pathogens to wild sheep. 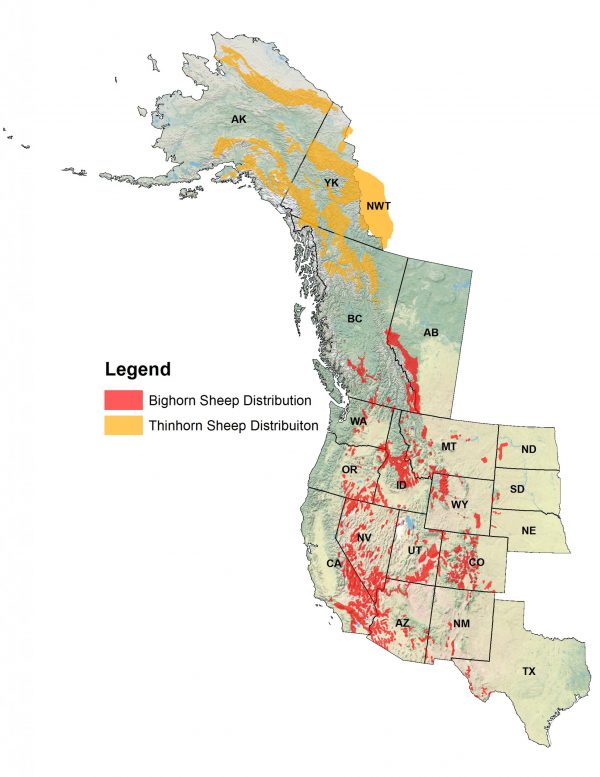 Jurisdictional management plans for each state or province can be found from the agency website links below.

Government of Yukon Dept. of Environment

Sadly, at the beginning of the “stay at home order”, we had 2 comingling events in Nevada.  The first involved a stray domestic ewe left behind last fall from its large band on a trailing route between summer and winter range.  It hooked up with a wild sheep ram group and was feeding and bedding with them for potentially weeks. The other event was 2 young bighorn ewes that went on a “walk about” off the mountain down to a ranch to comingle with a group of domestic rams.  Unfortunately, the consequences of violating social distancing in the sheep world is typically lethal removal.  Which was the case with the domestic and 2 wild ewes to prevent further spread of potentially deadly pathogens to a greater number of sheep.

In 1805 when Lewis and Clark were exploring the Great Plains and Intermountain West, they saw large numbers of wild ungulates be they bison or bighorn.  It is estimated that over 1 million bighorn sheep were distributed from Mexico to British Columbia.  Beginning in the late 1800’s millions of domestic sheep began grazing every hospitable mountain and valley westwide after being brought over to the U.S. from Europe.  Like the Pilgrims on the Mayflower, domestic sheep were carriers of pathogens that the immune system of Native Americans, and similarly native wild sheep, had never experienced before.  Indians died by the tens of thousands from smallpox to measles.  The pandemic that struck wild sheep from the Dakotas to California were pathogens that bands of domestic sheep harbored and transmitted that caused bronchial pneumonia.  Bighorn being “kissing cousins” of domesticated sheep were socially attracted to each other while grazing from the base to the top of every grassy mountainside and rocky rim.  In fact, it is now theorized that possibly as early as the 1500s Spanish explorers left domestic sheep and goats in Mexico and the Southwest that may have come in contact with native desert bighorn herds, causing pneumonia dieoffs.

By the 1950s, the dust “literally” cleared on the ravaged western landscape across most of the native ranges of bighorn sheep.  Entire herds were extirpated west-wide and bighorn numbers plummeted below 30,000 individuals; over 95% of their species gone.  For decades, many unfounded stories and theories were spread on how 1 million wild sheep that live in the most rugged environments and inaccessible country of the west could have died.  Similarly, to Covid-19, conspiracy theories of how it all started grew out of frustration and lack of knowledge and belief in science.

Though tremendous efforts were made by passionate sportsmen and wildlife biologists to restore bighorn numbers presently approaching 90,000, the bighorn pneumonia pandemic still exists today across the west.  There are new and virulent pathogen strains, bighorn to bighorn herd disease transmission, and chronic carriers that look healthy but are shedding the disease. Unlike Covid-19, its deadliest and tragic long-term effect is pneumonia that kills lambs year after year when they are 2-4 months of age, the “silent death” that few, if any humans ever observe.

Bighorn by nature are highly social be it nursery groups with their attendant lambs or large “bachelor” ram groups like human neighborhoods, bars, and social/sporting events across America.  Bighorn also have a strong propensity to travel and explore their world, with rams and even ewes going on “walk abouts” and interacting with domestic and wild sheep along the way as they explore their world around them.

So what is the best approach to managing a pandemic?  Most wildlife agencies began in the 1970s to restore bighorn herds to historic ranges where they had been extirpated. But still, many unknowns and lack of science and technology existed to give a clear picture of how to “recover” ourselves from the pandemic. As with the 1918 Spanish Flu, some methods and approaches to disease management actually promote the virus spread and further complicate recovery.  In many early reintroductions, bighorn were translocated too close to existing domestic sheep use areas and within a decade there was transmission between the two and similar fate of the past massive adult dieoffs and chronic post-event lamb mortality.  Appropriate and reliable testing was critical to improving our ability to detect the real pathogens that were key to causing pneumonia events. Wild sheep managers and wildlife veterinarians were “chasing bugs” for 20+ years.  It wasn’t until 2011, that Polymerase Chain Reaction (PCR) DNA “fingerprinting” of pathogens was commercially available to agencies to detect the key pathogen Mycoplasma ovipneumoniae (Movi).  Ah yes, now comes into play the term “herd immunity”!  Through statewide disease surveillance west-wide and collaborating with many researchers, epidemiologists, and disease ecologists we confirmed wild sheep will clear the Movi infection, build antibodies and allow us to confirm they have been exposed to it and no longer are “actively shedding” to other sheep.  But 2 problems; the first is we have detected “chronic shedders” that don’t clear the infection and reinfect other sheep. Like when nursery groups form every spring, a single ewe can reinfect all the ewes and their lambs.  Ewes have immunity and fight it off but the lambs don’t and most will die before they are 4 months old.  The second problem is herd immunity is only for a single Movi strain.  If a bighorn herd is exposed to a new strain of Movi, their immunity to the first strain doesn’t work to combat the new strain causing a high mortality rate to the second strain.

Back to social distancing. I’m implementing a statewide “sheep separation strategy” with our Nevada Woolgrowers.  They are slowly opening their doors and mind to what I and my colleagues have been speaking about for years.  They are “salt of the earth” people just trying to make a living but the unintended consequences have contributed to this wild sheep disease pandemic.  We must work collaboratively to do our best to maintain separation and better understand how the pathogens and other variables interact.  We continue to experiment both in the field and the laboratory through documented trials, attempting to give wild sheep managers tools in their toolbox to maintain healthy wild sheep herds in sharing the west-wide landscape and being mindful of both wild and domestic herds that have been exposed to the sheep’s version of Covid-19.

The WSWG is comprised of a representative from each WAFWA state, province, and territory (N=20) with wild sheep, plus representatives from the U.S. Forest Service and the Bureau of Land Management, National Park Service and the Wild Sheep Foundation. The WSWG meets twice/year, in conjunction with the WAFWA summer meeting and the Wild Sheep Foundation (WSF) annual winter convention. 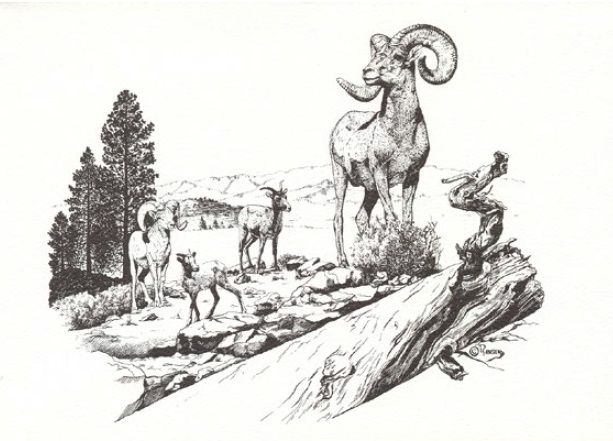 April 11, 2023
Alpine, Texas
The 57th meeting of the Desert Bighorn Council themed The Good, The Bad and The Ugly: successes, disease, and aoudad/predators, will be hosted by the Texas Parks and Wildlife Department.